I just downloaded the Parents Guide to 21st Century Learning from Edutopia. It is a relatively short document that would be a good starting point for any parent (or teacher) wanting to wrap their head around this whole ’21st Century’ education business.  Primarily, it’s purpose is to highlight the importance of the four C’s:

both in and out of the classroom.  Page 7 of the document offers the following suggestions for parents: 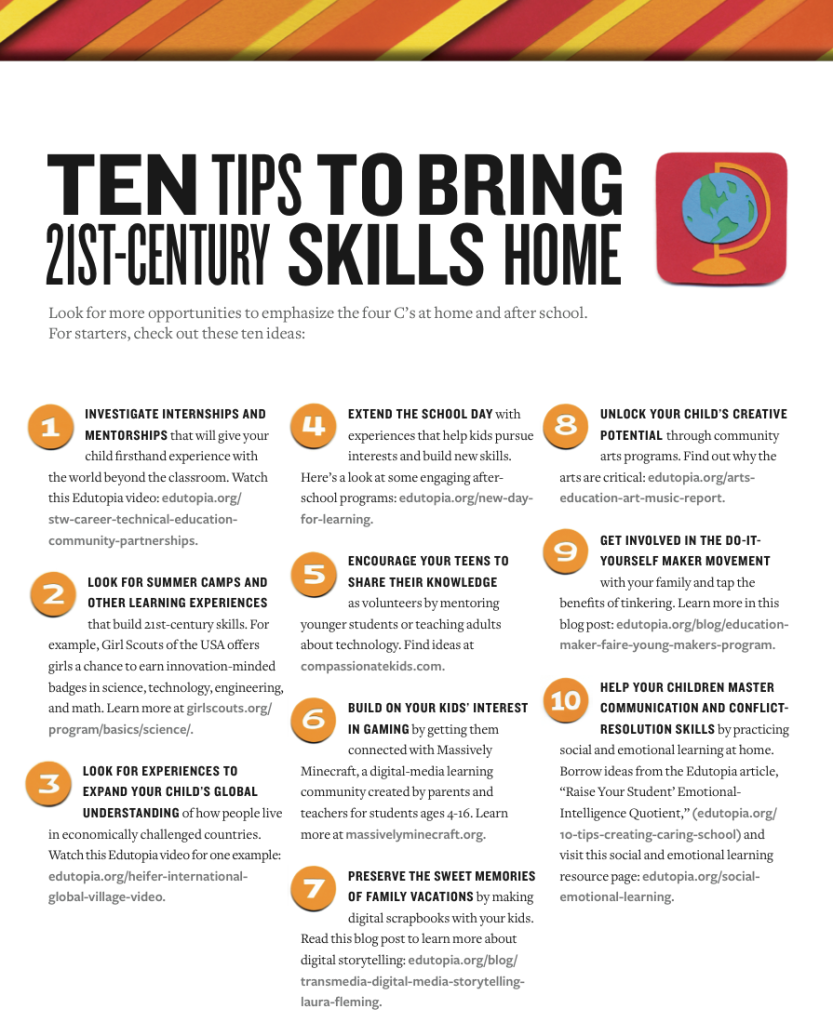 As I read through this, I thought of some other options – at least for the first three on the list:

Idealist is on a mission and has a clear vision for where they are headed.  This is a great organization and a great way to help connect you to your community – wherever in the world that may be.  In their own words:

We would like to live in a world where:

Idealist connects people, organizations, and resources to help build a world where all people can live free and dignified lives. Idealist is independent of any government, political ideology, or religious creed. Our work is guided by the common desire of our members and supporters to find practical solutions to social and environmental problems, in a spirit of generosity and mutual respect.

I am a huge fan of the Khan Academy and so excited to hear of their Summer Camp – the Khan Academy Discovery Lab (even the name is awesome!).  I believe that spaces are filled for this coming summer but it would definitely be something to look into if you have a curious 6th through 9th grader in your life. Back in June last year, Sal Khan blogged on Bringing Creativity to the Classroom.  Here are some projects he had kids doing in the name of math and science – projects that convinced him that this is how math and science in schools ‘should’ be:

And here is what ‘camp’ looks like, Khan Style:

For a really good, first hand look at how we can help people in economically challenged environments, Kiva.org is a great place to start.  Kids (or adults or families) can loan out money and then be paid back once the person taking the loan has used the money to set up whatever entrepreneurial venture they have proposed. The repayment rate is 98.94% and once repaid, you can pull your money back out or you can reinvest it in someone else to make a difference in another persons life.  Recently GOOD.is featured an article on Kiva and similar programs, indicating that there was bias in the way donors chose their recipiants.  This would be an interesting article to read before donating.  More interesting, would be to first go to Kiva and pick out your potential recipiant and then read the article to see if you fit the pattern suggested by the research!   (Either way, go to Kiva and give someone a hand).

OK…that covers items 1-3 on the list above.  Stay tuned for further investigation and alternative ideas for the other items on the list!